You can tell I really like Scarlet Heroes because I'm always bringing it up. Not only was it the very first solo RPG book I bought, but also I find myself going back to it, time and time again, despite having other titles in my collection. 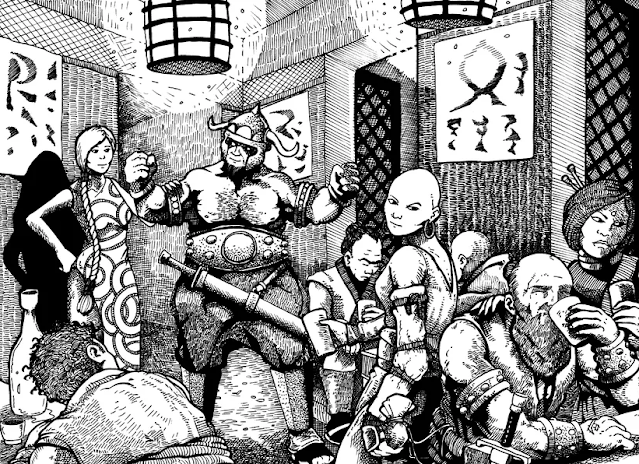 The illustrations of the book are also fantastic, in my opinion!

Due to its origins (see my previous article for a quick overview on this), Scarlet Heroes is easily customizable and adaptable. This is exceptionally useful if you're playing entirely on your own.

By default, the game comes with the monsters, spells, and lore of the Red Tide, an original campaign setting by Kevin Crawford (the one man behind Sine Nomine Publishing), which was made available as a Labyrinth Lord supplement around the time Black Streams: Solo Heroes (Scarlet Heroes' predecessor) was originally released. The world of the Red Tide was inspired by Southeast Asian myths and culture. When the full Scarlet Heroes was released via Kickstarter, the Red Tide setting was included as part of the book.

Even though there are some interesting ideas and concepts in the world of the Red Tide, I'm personally not a big fan of it (and this has to do with my background in sociocultural studies more than anything else). However, I love all other aspects of the game. Fortunately, this can easily be fixed by playing Scarlet Heroes side-by-side with the standard fantasy contents of its source: Labyrinth Lord.

This means that if you like the SH rules, but you're not a fan of the default setting it comes with, you can always customize the game to your liking.

Here's how to turn Scarlet Heroes into a default fantasy setting game, while keeping all of its core rules and dynamics intact:

The World of the Red Tide

Skip entirely. Use another pre-existing setting of your choosing, or go with a generic fantasy world.

A Bestiary of Foes 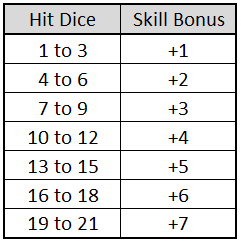 And, this is all you need to play Scarlet Heroes using Labyrinth Lord's monsters, items, and spells.

ABOUT COMBAT IN SCARLET HEROES

One last detail of clarification. In terms of combat, Scarlet Heroes may feel a little bit confusing on how it's all done. But the system is really simple.

Combat is divided in turns and rounds. One turn allows you to:

Monsters get to act the same way during their turn, except they don't use the fray die; only the hero does. Once your hero and all involved monsters have taken their turn, you complete a round.

Combat progresses, round after round, with the hero and the monsters taking turns each round, until your hero defeats the monsters, or you're defeated instead.

When it comes to attacking, Scarlet Heroes uses the following formula:

In case the roll is a success, you check for Damage (DMG).

In the case of heroes, once their DMG roll is done, they need to check their result in the following table: 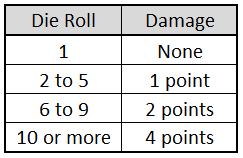 The final resulting DMG value will be applied to the monster's Hit Dice (HD) directly. So, a monster with 1 HD can be killed if the hero rolls a 3 on their DMG roll with the two-handed sword because that deals 1 point of DMG on the 1 HD of the monster, thus killing it.

For monsters, rolling for DMG will work the exact same way, except that they'll use whichever type of attack is defined in their stats (e.g. bite, claw, horn, fist, beak, etc.), how many attacks it makes (e.g. 2 claws and 1 bite) roll the corresponding dice it gets for its Damage stat, and then check on the chart above to see how many points of DMG it caused to the hero. Because heroes don't have Hit Dice (HD) but Hit Points (HP), all DMG dealt to them goes to their HP.

A hero's Fray Die is rolled as if it were direct DMG. That means, the Fray Die will always hit. The only rule is that a hero can only use their Fray Die on a monster that has as many HD or less than the hero's current level. So a hero level 2 can hit monsters that are 1 or 2 HD. A monster with 3 HD would be above the hero's current level, and thus wouldn't be affected by the Fray Die. The only exception is if the hero is a Magic-User; in that case, their Fray Die can be used against any enemy, regardless of their HD.

If you want to read the rules in more detail, check Scarlet Heroes p. 18.

Popular posts from this blog

March 23, 2019
I've seen this question pop up time and time again in forums and similar websites: How do you convert 5e material into OSR games? This applies mostly to monsters, foes, and other creatures that sometimes are hard to convert into older systems because of the concepts of AC (Armor Class) and HD (Hit Dice). Modern 5e foes use HP (Hit Points) as opposed to HD, and their AC is ascendant (which means that the higher the AC, the better). So, whenever you're playing a module, things go smoothly until you encounter your first enemy, and then you're lost because how do you transfer such a detailed enemy into a much simpler system, while ensuring you're keeping it relatively balanced? Well, here's one way how you can do it. I'd like to share with you a very simple conversion system, that will allow you to convert 5e foes and other creatures to OSR games with a descending AC (such as Labyrinth Lord). This also works with other games such as Scarlet Heroes (more info
2 comments
Read more

Minimalist RPGs that I love

July 10, 2019
Hello! It's been a couple of months since my last update. But fear not! Here's a new entry for all of you. Today, I'd like to delve into the realm of tiny yet flavorful role-playing games. I have been reading, collecting, and studying a bunch of minimalist RPGs that are available for free for the past year or so. There are LOTS of different options available, and most of them take but a couple of minutes to read. Because I'm a solo RPG enthusiast, part of my research has focused on the possibility of being able to play those games on my own. And, I've found two systems that I consider to be a true delight: Bivius and USR! BIVIUS The first one , I've already referenced here on the blog. I'm talking about Riccardo Fregi's (AKA Lost Pangolin) glorious and minimalist: Bivius What makes it so great? For starters, it's main aim is solo gaming, which means that you need no special circumstances to play, as long as you have the time to do so. Al
5 comments
Read more

Check all available products at DriveThruRPG!